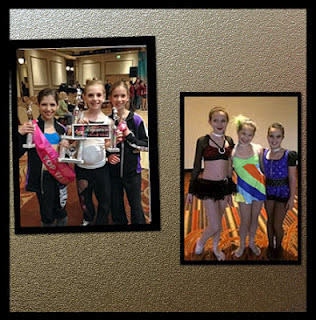 Today all the kids who had a Solo, Duo, or a Trio competed in Phoenix at the STEP UP 2 DANCE competition.  This is Leyla’s 2nd year on the dance team and she has not been in a solo yet.  Personally, I am happy that she does not have a dance solo.  It’s not that I don’t want her to ever get one; I just think it would have been a little overwhelming this year.   Last year she competed in two dances and this year she is competing in 8 dances; which is a big adjustment so adding a solo would be over the top, at least for me. I only wish that we were able to go up to Phoenix to support the entire dance team.  Unfortunately, I have been under the weather and did not feel comfortable with the long drive.
The good news is that our kids kicked butt and received Platinum and High Platinum awards.  High Platinum is not given out often and, at times, seems imposable to get.  The Shining Stars Trios took first place overall!  Sasha, Waverly, Carly, and Amanda received a Diva award.  Two of the Shining Star solos received 2nd overall but in different age categories.  Unfortunately, that’s all the details I have right now but I promise to fill you in as I learn more. If you were at the competition please post information under comments.
The next competition is less than a half a month away and most of the team’s dance numbers will be competing in this competition.  Thursday night, when I was watching Leyla and Leah dance, I got a kick listening to some of the other mom’s talk about Rhinestoning costumes.  Many of the dance teams have not yet gone to competition with their group dances so Albuquerque will be first competition for some of the dance teams.  This means that moms will need to dig out the tweezers and the Jewel-It glue and start putting Rhinestones on costumes, boots, etc.  One of the hip hop dances are just now ordering their costumes and may have to Rhinestone on the plane.  Sucks to be them!!  Wait, that reminds me!  I better go through Leyla’s costumes and make sure I fine tune them.   Leyla’s jazz routine costume for Party Girl needs a little work.  The top of that costume is all black; we used a variety of different size rhinestone to add some bling.  I thought I glued enough Rhinestones on Leyla’s top but at the last competition, right before she went on stage, I noticed something really wrong!!!  Somehow I made the Rhinestones into a complete circle around her top; which made it look like I was highlighting her … Well I can’t even say it.  What kind of mom am I??  My poor child!  I asked Leyla if anyone said anything to her about the Rhinestones on her top and she replied that one of the girls said that her top looked a little different than the rest…   Tip number one; have your child try on the costume once the Rhinestones have had time to dry to make sure that Rhinestones are evenly placed and do not accent areas you do not want to draw attention to.  AG made a comment that she was a little nervous about putting Rhinestone on the customs and hopes to get started as soon as possible.  She said she read my blog and wanted to make sure that wouldn’t happen to her; I think I might have permanently scared her!
« Previous Post Next Post »