Leyla and I spent last week in Las Vegas with the other DF1 dance team dancers representing not only Dance Force 1 but all of Tucson dancers at the KAR Dance National Finals in Las Vegas. The event was held at the MGM Grand Sunday July 1st and ended Sunday July 7th.  I was a little worried about how Leyla and I were going to survive seven days in Vegas when the longest I ever stayed in Vegas was three days and I was barely alive when it was time to go home.  The majority of the dancers on team stayed at the MGM Grand for the week.  Leyla and I were anxious when arriving to Las Vegas and were filled with mixed emotions; we felt scared, nervous and excited all at the same time.  Rock Star, Super Star, Shining Star, Shooting Star, and Future Star teams had dances that were selected to compete in nationals based on how well the dances did throughout the year.

The first of six competitions started in January 2012 not counting the performance early in the year and the dance recital in June.  Shining Star dance team learned a total of 6 small group dances plus many of the girls also learned solo, duos, trios, and big group numbers. Large group numbers are mixed with different dancers from the different teams within the company.  The National competition was the last competition for season and dancers flew in from all over the U.S to compete with the best of the best!  The skill and talent at the National level is no joke and can be a little intimidating for dancers, especially if you’re not from one of the major big cities.

Leyla is a part of the Shining Star dance team with a total of 8 girls in the group. Overall this year they were not consistently doing well enough to feel 100% confident about competing in the Nationals competition in Vegas.   Many of our concerns eased up when it was announced that only the dances that did well throughout the year were going to Las Vegas.
Dance, like other sports (yes, I consider it a sport!), becomes very expensive the more competitive the dancer becomes.  Most dance competitions have entrance fees for each dance plus the cost of costumes, travel, room and board, and any miscellaneous costs while traveling.   Taking the dances that had a chance of placing was not only a smart decision but also lowers the cost of entrance fees.  :-)

The last KAR Artistic Revue competition was in Phoenix the first week of June. The Shining Star team’s jazz number Party Girls placed second overall and hip hop Who’s that Chick placed first overall for their age division.  You would think that based on the last competition that all the parents would feel good going into Nationals.
You just never know what the judges are looking for and how the dances are going to do.  Although the dances took first and second at the Phoenix KAR competition they didn’t do well at the Rainbow Connection competition back in May.  This is why many of the parents had concerns about going to Nationals; we were not consistently placing in the top three.

The multiple elements of a dance competition can be very confusing.  It took me a whole year to understand it, and to be honest, I’m still not 100% confident how the whole thing works.

Each dance competition usually has three basic categories that the judges score on.  Depending on who is hosting the competition the names for the individual awards can change their meaning, sound very similar, or have completely different definitions for the same titles. This is the confusing part for me; right when I think I figured out what all the titles mean for one competition the same name will have a different meaning at the next competition.
The Las Vegas Nationals awards and categories were broken down differently.

Individual:  Each dance routine receives in individual title of Elite Top First, Top First, First, and High Second.  Elite Top First is the highest title a routine can receive followed by Top First, First, and then High Second (Which is in the famous words of Leyla means “thank you very much have a nice day now go home“).
Categories of Dance:  Dances only compete within their own dance/age categories.  Jazz competes with jazz, tap with tap and so on.

Winning first in your category may not always be as great as it sounds.  There are over 16 different categories so who a team competes against depends on the number of studios that register for the competition and where they put their dances in the categories.  A team may place first but may only have competed against two or three other teams and it’s possible that a team ends up competing against either another dance team from the same studio or even against themselves in another dance!  Another example is getting first place for the category but only receiving an individual High Second award.  This means you were the best of the worst.
Overall:  Each dance, regardless of dance categories, completes against each other in the same age range.  This is the award every team strives to place first, second or third in. What is most impressive is when many dances get an Elite Top First and also place first over all.
Some of the DF1 solos performed on Sunday and the big group number Winter performed Wednesday. Winter, which has done well in the past, didn’t do well at Nationals. It received 1st in its category but did not place overall.
The older girl’s Elite Small Group for ages 15-19 placed 1st overall for the dance Fix You and won the showcase on Saturday.  Party Girl and Who’s that Chick from the Shining Star group and another big team group number, Dance, competed on Thursday.  Dance was the first of the three dances to compete on Thursday. The kids kicked butt and performed better in Nationals then they had all year. We all were expecting it to do well and were very disappointed when Dance only received a Top First and did not place overall. This was a discouraging start of the day.  Leyla and I, along with some of the other girls, were disappointed with the results and didn’t understand why Dance scored so low. I told Leyla to shake it off and not to let the results to Dance impact the other two small group dances that were next to compete.

Throughout the day there were times I couldn’t find Leyla and when I caught up with her she was on the side of the stage running over the dance moves and stretching without being told. I watched from the distance so she couldn’t see me.  I couldn’t believe my eyes; my child was in the zone and she was determined to do the best she could do and not let her team down!! The routine for Party Girl was filled with double and triple pirouettes, multiple turns in second, plus leaps and tricks.  April did a great job with the flow and the choreography with this dance but one mistake could ruin any chances of placing in Nationals. The girls ran their routine before going on stage and all the dance moms on the Shining Star team watched the girls run though Party Girl.  April did a great job utilizing the time to make the best of the last practice.  She was quick finding weaknesses in the routine and assisting the dancers in making the proper corrections. The kids listened and stayed focused.

The girls were up against some very tough competition and were competing against 28 to 30 dances in their category and around 40 or more overall. When the girls went back stage me and a couple of the parents rushed to our seats to watch the dance up front and center stage. The girls walked on stage and all the parents went crazy cheering them on from the sidelines. The music started and my heart stopped; I knew that the outcome of the dance was completely out of my control. The girls’ faces lit up the room and they blew everyone away with their routine.  As I watched them dance I got a lump in my throat and it took every ounce of my will to hold back my tears. I was so proud of all of them. Today they were a team and danced as one. They showed the whole world how hard work pays off.  After the number was over the parents rushed back stage to help the girls to get into their next costume. As the girls walked to the dressing room the parents’ congratulated them for a job well done. The second dance was Who’s that Chick and the girls yet again bought on their A-game and we all were pleased with how well they did!! The girls did the best they could do and now it was all up to the judges.  I only hoped that the girls placed in the top five. It was hard to tell because we all thought Dance did well and it didn’t place at all. 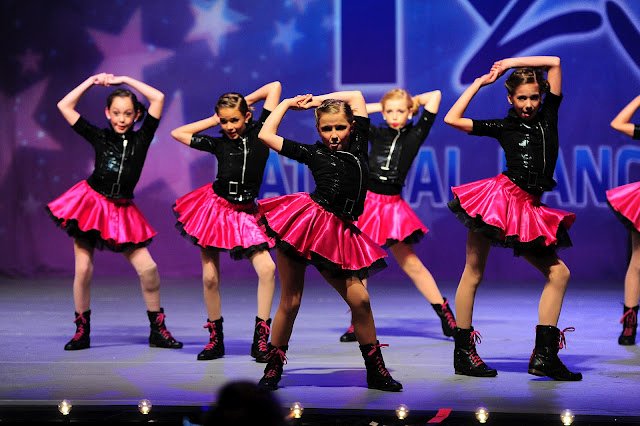 We celebrated how well the girls performed with pizza and then returned to the stage for the award ceremony. The room filled up quickly as the dancers made their way on stage to hear the results. One by one each dance received their individual title. Party Girls and Who’s that Chick both received Elite Top First, which is the highest title a routine can receive. KAR wasn’t giving out Elite Top First very often so receiving Elite Top First for both of our numbers was huge. I’m not sure of the exact numbers but my guess is that there were 8 teams out of the 35-40 who also received Elite Top First. When it was time to announce the overall winners we were pleased to hear that Who’s that Chick placed in the top 10 .  When it got down to the top five and Party Girl still hadn’t been called. The excitement of being in the top 5 seemed unreal and almost a dream. Forth overall was called, then third and still no Party Girl. Oh my goodness we got second I couldn’t believe it!!!!! Then when second overall was called and it wasn’t Party Girl the mom next to me said we did it! I thought to myself no way, she has to be wrong; we must have not placed at all maybe and were mistaken in the count down. The room was packed and the girls were getting more and more excited as the number one overall dance was announced and it was Party Girl! I had a hard time holding up the camera while recording all the action without losing it. The girls did it!! Wow they really did it!! This has been a crazy stressful year with ups and downs and at this very moment watching our girls jump up and down with excitement made every minute worth it. When April joined the girls on stage my eyes filled with tears for her and her accomplishments with this team. What a perfect ending for to the season. 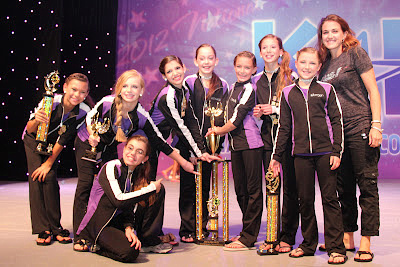 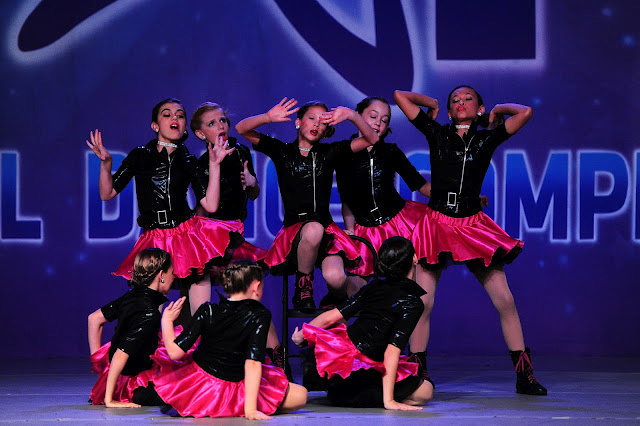