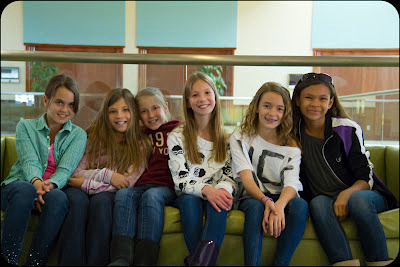 I think I’m finally recovering from the Albuquerque, NM - Regional Competition.  We left Thursday night of last week and returned home Sunday around 8pm.   I never knew it was possible to experience so many mixed emotions in such a short amount of time.
A group of us left Thursday night to Albuquerque even though competition didn’t start until Saturday.   One thing that sucks about planning your traveling for dance competitions is that you don’t always know which days you need to be at the theater until a week or two before competition.  We all got a great deal on our tickets and didn’t want to risk the cost of the flight increasing or not being able to get a direct flight so we booked the trip from Thursday thru Sunday. As it turned out the girls were only performing on Saturday and Sunday.  Robin and I thought that having an extra day would give the girls plenty of time to relax before the competition.
We checked in to the Doubletree by Hilton around 9:00pm.  I am not a fan of Hilton hotels; and it does not have anything to do with Paris Hilton. I just haven’t had one good experience in any of their hotels.    We were all hungry after the flight and had to order room service for dinner because the hotel restaurant closed early.  We had  used a shuttle service from the airport so we didn’t have any other options.  The next thing we did was check out the pool.  Leyla’s dad had brought her a new swim suit for the weekend and Leyla was looking forward to swimming with her friends.  I was looking forward to sitting in the Jacuzzi while doing absolutely nothing.  We walked through the hotel gym to get to the pool.  There was just one little small missing detail in the online description about the pool ….IT HAD NO WATER… and there was no Jacuzzi.  It never crossed my mind that the hotel wouldn’t have a pool available for guests year around.  I have never been to a hotel that didn’t have a pool.   Wow what a big disappointment!!
Dinner was delivered to our room and we forgot to order drinks.  Opps..   We were pretty lucky because our room was right outside from a vending machine full of cool refreshing beverages.  Leyla and Robin searched the room for change and could only find a dollar.  The cost for a beverage was $2.00 but oddly enough the machine magically spit out a dollar bill. We thought that it would be ok to take the dollar bill under these circumstances since we couldn’t let the kids go thirsty.  Leyla inserted the first dollar bill but the vending machine kept spitting it out.  Both of the dollars was not accepted and we were all dying of thirst.  The end result is that we were a dollar richer and had to drink tap water.  When I told Leyla I was going to use the bathroom water to fill up the cups she just about had a heart attack.  Its sounds gross and in her defense she never had drank tap water before. It was actually pretty good.  It may sound crazy that she has never drunk tap water but there was a refrigerator with filtered water everywhere she’s lived; which is a little funny because I was raised on tap water.  Wow I’m getting old!!
Robin lowered the air in the room since it seemed a little stuffy.  The best part of a hotel is the cool AC and being able to lower down the temperature to your likings.     We were disappointment when we found no refrigerator in the room and felt horrible to have to throw away our left-overs.  We were planning on buying food and eating healthy and now we had to rethink the food situation.  We found out later that we could have gotten a refrigerator for an extra $10/per night.
After dinner Leyla turned on the TV and flipped to the Disney channel and to our surprise there was a cost of $3.99 per episode. We decided to get ready for bed.  Robin open the door to the hotel to get some cool air in the room and notice the vending machine had spit out another dollar.  I thought maybe we were on Candid Camera and we were being filmed to see how many dollars we would take.  Our first Thursday in New Mexico was turning out to be an interesting start....